New census numbers are staggering. We know Utah is growing.

See by how much and where.

Minorities now make up a quarter of the state’s population.

Utah is in the middle of a historic population boom, and new census numbers released Thursday make it clear no state is transforming at a faster clip.

Its nation-leading population spurt has spurred an impressive rise in new housing. Utah remains the nation’s youngest state and yet it saw the fastest growth in residents 18 and older. Its population is diversifying, particularly in metro areas where the state saw a jump in its Hispanic population.

The Census Bureau released this 2020 data Thursday to help states create new political districts as required by the Constitution, but these numbers also tell a story of a nation that is growing older and less white, and where the West is rising. 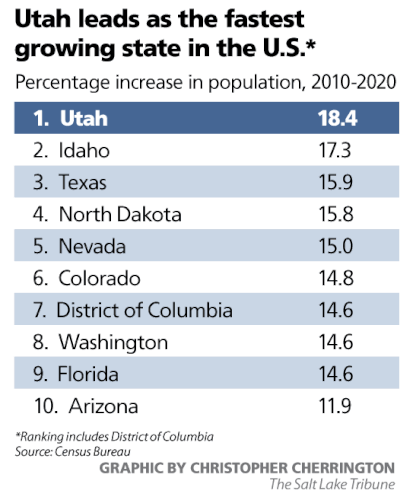 Utah added half a million new residents between 2010 and 2020, a combination of people moving here and Utahns having children. That’s an 18.4% growth rate, the fastest in the nation.

And it wasn’t particularly close.

Among all metro areas, The Villages in Florida grew the fastest, while St. George came in third. Utah’s Heber City was the fifth quickest-growing micro area.

The population explosion was centered in the metro areas in the north, led by Wasatch County’s eye-popping 47.8% leap in the past decade. Followed, in the south, by Washington County, which grew by 30%.

Conversely, rural counties in the center of Utah and in the southeast — places like Wayne, Emery, Carbon and San Juan, saw their small populations decline even further.

While nobody is getting any younger, Utah is still out in front as the nation’s most youthful state.

The effect of aging baby boomers — folks between 57 and 75 as of 2021 — combined with steady declines in the U.S. fertility rate over the past decade to make the country older as a whole.

That aging effect came against a backdrop of slowing population growth overall between 2010 and 2020. And even though rapidly growing Utah saw the biggest leap of all states in its adult population since 2010 — up 22.8% over the decade — the state still ranks as the country’s youngest, with its share of those over 18 at 71%.

Utah’s total population now breaks down to 2,324,000 residents 18 or older and 948,000 under 18. The adult populations in three rural Utah counties — Uintah, Juab and Morgan — are now less than two-thirds of the total population, putting them among the nation’s very youngest.

Utah remains one of the whiter states in the nation. Most states saw its “white, not Hispanic” population decline, but 15 states saw an increase and none topped Utah’s 11%. The District of Columbia did beat Utah, though, seeing its white population swell by 25%.

Still, Utah marked a significant increase in racial and ethnic diversity. In 2010, 19.6% of residents were minorities. In 2020, that rose to nearly a quarter (24.6%). This growth happened during Utah’s nation-leading population surge.

Hispanics make up Utah’s biggest minority group. They account for 15.1% of the state’s population and 19.6% of Salt Lake County residents. The second largest minority group is people who identify as two or more races, not Hispanic. That is 3.7% of Utah’s population. After that, it is Asian at 2.4% and then Black and Pacific Islanders tied at 1.1%.

The pace of U.S. housing construction slowed between 2010 and 2020 compared to the decade before, but, again, Utah’s population growth bucked that trend.

Housing units grew by 6.7% for the country as a whole, a growth rate dampened by hangover effects of a mid-2000s homebuilding boom followed by the market crash that led to the Great Recession and an oversupply of housing.

But the West and South regions saw homes go up much faster as they grew, and Utah saw its housing stock surge by 17.5% — nearly triple the national increase.

Despite that growth, housing analysts estimate Utah still lacks more than 50,000 rentals and homes for sale even as homebuilders add units at a historic pace — a gap made worse by the pandemic.

Utah’s vacancy rate is at 8.2% compared to 9.7% for the U.S., confirming other data that indicates a historic dip in home inventories available for sale and rent along the Wasatch Front and a trend of soaring demand.